The fire triangle or combustion triangle is a simple model for understanding the ingredients necessary for most fires. It has been replaced in the fire fighting and protection industry partially by the fire tetrahedron (see below).

The triangle illustrates a fire requires three elements: heat, fuel, and an oxidizing agent (usually oxygen). The fire is prevented or extinguished by removing any one of them. A fire naturally occurs when the elements are combined in the right mixture.

Without sufficient heat, a fire cannot begin, and it cannot continue. Heat can be removed by the application of a substance which reduces the amount of heat available to the fire reaction. This is often water, which requires heat for phase change from water to steam. Introducing sufficient quantities and types of powder or gas in the flame reduces the amount of heat available for the fire reation in the same manner. Scraping embers from a burning structure also removes the heat source. Turning off the electricity in an electrical fire removes the ignition source.

Without fuel, a fire will stop. Fuel can be removed naturally, as where the fire has consumed all the burnable fuel, or manually, by mechanically or chemically removing the fuel from the fire. Fuel separation is an important factor in wildland fire suppression, and is the basis for most major tactics, such as controlled burns. The fire stops because a lower concentration of fuel vapor in the flame leads to a decrease in energy release and a lower temperature. Removing the fuel thereby decreases the heat.

Without sufficient oxygen, a fire cannot begin, and it cannot continue. With a decreased oxygen concentration, the combustion process slows. In most cases, there is plenty of air left when the fire goes out so this is commonly not a major factor. 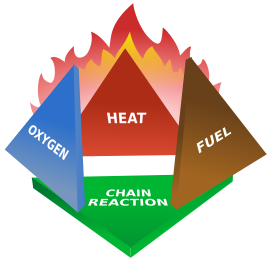 Combustion is the chemical reaction that feeds a fire more heat and allows it to continue. When the fire involves burning metals like lithium, magnesium, titanium, etc. (known as a class-D fire), it becomes even more important to consider the energy release. The metals react faster with water than with oxygen and thereby more energy is released. Putting water on such a fire results in the fire getting hotter or even exploding because the metals react with water in an exothermic reaction. Carbon dioxide extinguishers are ineffective against certain metals such as titanium.vTherefore, inert agents (e.g. dry sand) must be used to break the chain reaction of metallic combustion. In the same way, as soon as we remove one out of the 3 elements of the triangle, combustion stops.